NEWS ARCHIVE:
AFTER THE RAIN:
FAN REPORTS FROM THE CURRENT TOUR (PART I)
GIGS ARE A MIXTURE OF GOLDEN OLDIES, UNEXPECTED
SONG CHOICES AND ENTHUSIASTIC AUDIENCES
News Index 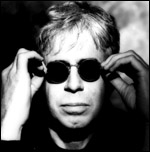 19 February 2000 -- Cortland Peterson, a BC fan from the US, recently caught a series of Cockburn gigs in the California area, and wrote the following review on Humans, the largest Internet-based Cockburn discussion forum. His review will make interesting reading for those still waiting for Cockburn to turn up in their town in the coming two months, as it is representative of other comments recieved and gives people a lot to look forward to. Reprinted with permission.

I guess seeing Bruce four times in the Bay area in the last two months will start to make up for him blowing off the West Coast for a year.

Starting with Nanci Griffith bowing down to him after playing an exquisite Creation Dream at the 1 December landmine benefit concert at Stanford, to the ethereal Use Me While You Can to end the 16 February show at the Warfield in San Francisco, I 'm one happy human.

Suzanne and I headed up to Santa Rosa on Tuesday 15 February, up Highway 1 from Santa Cruz, enjoying listening to Breakfast in New Orleans, Dinner in Timbuktu and watching the storm-driven waves at Half Moon Bay (this is where the Mavericks' surf spot is, 60 ft. faces on 35 foot waves!). When we switched to the radio, Night Train was playing, and we started laughing when the D.J. growled into his mike when the song was over, "I need a vacation".

The Luther Burbank Center (pictured left) reminds me more of a church with its pews and 75 year old ushers, but the acoustics are perfect. It was only about three quarters full which was a little disheartening to see because Bruce has come here for many years and this is always at least a 10 "we love you Bruce" audience (weird, huh, that I keep track of how many times the crowd yells that out?) but that was better than the next night in San Francisco where the Warfield was half empty.

Suzanne and I talked quite a bit later about why Bruce is so under-appreciated.

After The Charity of Night monster guitar tour, I was suprised at how the sound mix is all about emphasizing Bruce's vocals and downplaying the music, especially the drums and bass. Luckily, the crowd wanted Bruce's guitar turned up and was yelling from the first song onwards for volume. One guy about 10 rows back spent the whole night screaming at Bruce: "You Rock!!!" It was funny, Bruce never acknowledged him.

The set list was the same as Seattle though he removed Tokyo and If A Tree Falls the next night from the first and second set. Wah! Luckily he replaced Wondering Where The Lions Are the next night in the encore with Lord Of The Starfields, and All The Diamonds with Use Me While You Can. The latter was the song I wanted to hear most besides Look How Far.

I like everything that Bruce does but if something needs to go I don't mind not hearing him play other people's songs. The man has way too many great songs of his own.

You Don't Have To Play The Horses to open the show is beautifully played and Bruce is leaning on a quieter, jazzy sound this tour. He still rips on guitar and The Trouble With Normal, Down To The Delta, and If I Had A Rocket Launcher were highlights of the first set. Let The Bad Air Out was just plain bad which surprised me, since it is one of my favorites on the album. It was too short, and maybe needs a female backup on it. [Editor's note: I liked this. The definition of a "bad" Bruce Cockburn song is a short Bruce Cockburn song!]

The second set was really good with If A Tree Falls and Call it Democracy making everyone agree that Bruce does "Rock!!!" David hit the nail on the head with his comments on the new instrumental, with its Grateful Dead jam sound coming out of space - go to the show just to hear this!

It was nice to see Graham Knight and Kim at the Warfield show the next night, they were raving at how great the show was and indeed, the San Francisco set list, though leaner, was tighter and flowed better than Santa Rosa. Feast Of Fools only makes you want Bruce to break out more of these great old songs. Suzanne and I spent a lot of the show dancing on the floor in front of the stage. Come on people, get your butts out of your seats at the shows! Bruce is rocking!

Use Me While You Can was a wonderful way to end the show. I've always liked the"talking songs" and the intro takes me with Bruce to Mali as the imagery dances in my mind. Thanks Bruce.


Other comments from the Luthur Burbank gig

John Peregrim from Placerville, CA, wrote in to add, "I hope you get a chance to catch this tour down your way at some point, 'cause Bruce is playing superbly, pulling out some very interesting older material and really seems to be enjoying himself immensely."

JCK, who also sent in a setlist with good info about the between-song comments that will be added to the relevant song pages, added, "The show was roughly two and a half hours in length; songs, stories, and wicked guitar work; another great one from Bruce!"

Finally, another correspondent wrote to the Project to say, "Just returned from seeing Bruce at the Luther Burbank Center in Santa Rosa, Calif. It was a great show and I enjoyed it very much. I have been waiting to see him since I first heard "Dancing In The Dragons Jaws" in 1985. I must say it was worth the wait."