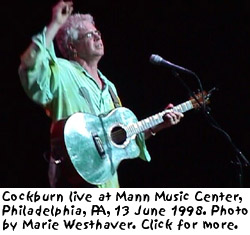 Cockburn is already known to be playing dates in the UK and Ireland at the end of July/beginning of August 1999. "Bruce will be back in Europe during parts of October and November this Fall/Autumn," Flavelle added, an announcement that will surely delight Cockburn's European fans.

The tour update also announced four new dates in the US during the second half of September, in New York, New Jersey, Boston and Chicago. See the gigs page on this website for more information.