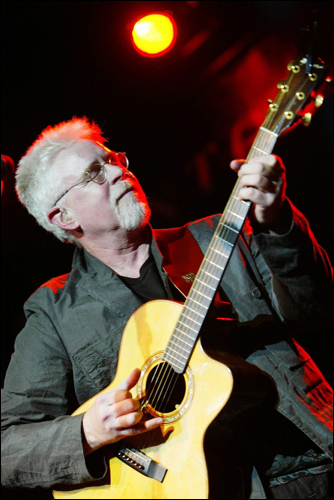 Bruce Cockburnĺs musical quest has taken him on a journey thatĺs lasted more than four decades and touched on everything from spiritual reflections to electric protest songs. Now 66, heĺs had a significant influence on pop culture, and is still making music that matters, as you can hear on his 31st and latest album, Small Source of Comfort.

Born in Ottawa, Cockburn took guitar and piano lessons as a teenager. He attended Bostonĺs prestigious Berklee College of Music for two years in the 1960s before returning to Ottawa to play in various bands, including The Children and Threeĺs A Crowd (which also included David Wiffen). Cockburnĺs career as a folksinger and guitarist began on the coffee house circuit, and was strengthened by an appearance at the 1967 Mariposa Festival. His first album was released in 1970.

By 1980, Cockburn was beginning to make an impact in the United States. His 1979 album Dancing in the Dragonĺs Jaws yielded an unexpected top-40 hit with the cerebral Wondering Where the Lions Are, as well as an invitation to perform on Saturday Night Live.

The winner of a shelf-full of Juno awards and the Order of Canada drew even more attention a few years later with the release of Stealing Fire. Although music fans of the 1980s were not used to hearing outspoken songs about issues on the radio, they were drawn by a soft-spoken Canadian ranting about a rocket launcher. The single If I Had a Rocket Launcher was written after Cockburn visited Guatemalan refugee camps in Mexico. A second single from the album was also inspired by his travels. Lovers In a Dangerous Time became one of Cockburnĺs most popular songs, thanks in part to the 1990s version by the Barenaked Ladies.

Other politically charged songs by the silver-haired troubadour include Call It Democracy, The Trouble With Normal and If A Tree Falls. Driven by a desire to make the world a better place, Cockburn has visited places like Mozambique, Bahgdad, Cambodia and, most recently, a 2009 trip to Afghanistan. He usually comes home with an idea for an issue-oriented song, such as anti-landmine Postcards from Cambodia or Mines of Mozambique. The latest example is the powerful Each One Lost, a mournful ode to lost soldiers thatĺs included on his recent album, Small Source of Comfort.

Another recent milestone for the Canadian Music Hall of Famer (and his longtime girlfriend) was the birth of their daughter, Iona. The same year, Canada Post issued a stamp bearing Cockburnĺs likeness.

For his humanitarian efforts, Cockburn was given the inaugural Allan Waters Humanitarian Award in 2006. In an interview with the Citizen that year, he explained his motivation.

"Growing up, I did a lot of canoe tripping in Algonquin Park. I went to a camp there in the summers and one of the things that they instilled in us was: Always leave your campsite better than you found it. It just seems to me that applies to life and the world," he said.