15 September 2008 - Bernie Finkelstein has given the nod to the following tribute being planned, interestingly entitled 'The Cockburn Project' being organized by Jason Fowler. 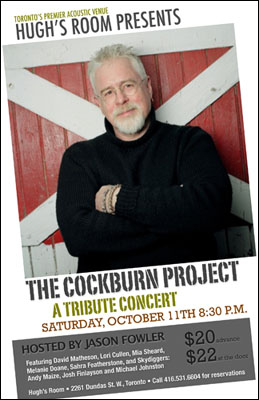 Fowler has been a big fan of Cockburn since he first heard "Foxglove" at age 12. Fowler spent countless hours during his high school years deciphering Cockburn's deceptively difficult guitar playing. "It's surprising how few people seem to realize what a phenomenal guitar player Bruce is. And over the years I've realized that a significant part of what drew me to his music was the lack of overt showmanship in his presentation. You have to listen with your ears, not your eyes. Bruce's music moves me very deeply and it felt like it was time to share that appreciation with others. And I knew that a lot of my peers feel the same way about his artistry."

The concert will feature Jason performing a number of Bruce's intricate instrumental guitar pieces such as Foxglove, Cader Idris, Deer Dancing Round A Broken Mirror, Water Into Wine as well as singing a few of his favorites such as Pacing The Cage and My Lady And My Lord. Some other songs which will be sung by other guests that night are Coldest Night Of the Year, Rumours Of Glory, Lord Of The Starfields, All The Diamonds, Wondering Where The Lions Are, One Day I Walk and Messenger Wind.

"Bruce has had a deep impact on a lot of musicians and I spoke to quite a few artists who, due to scheduling conflicts, couldn't participate this year. So it's my hope we can do this again next year!"

Jason Fowler is a Toronto singer/songwriter, session guitarist and producer with 4 CD's to his name. He is currently working on a new CD for release this fall.

He has played on over 100 albums and has toured internationally with renowned Irish tenor John McDermott since 2001. He is a member of The Anne Lindsay Band and has played with April Verch, Amy Sky, Marc Jordan, Susan Aglukark, The Cottars, Quartette, Susan Crowe, Nana Mouskouri, Murray McLauchlan, Brent Titcomb, Ian Tamblyn, Jory Nash and many other artists in Canada's roots music community. He was the 2003 recipient of the Porcupine Award for Outstanding Musical Accompanist.

He has produced albums for David Bradstreet, John McDermott, D'Arcy Wickham and Blake Papsin and has composed/produced a number of CDs for Avalon Music.

A two-time winner at the Walnut Valley National Guitar Championships in both the Fingerpicking and Flatpicking categories, Jason is acknowledged as one of Canada's most gifted guitarists. He holds a degree in Classical Guitar Performance from McGill University and in 2004 was the inaugural winner of the OCFF (Ontario Council of Folk Festivals) Instrumental Composition of the Year Award. ~Jason Fowler