Tom Morton interviewed Bruce on his afternoon radio show on BBC Scotland radio 4 June 2003. Cockburn Project reader Doug Small transcribed the interview so we could all 'hear' what went on that afternoon. Thanks Doug! 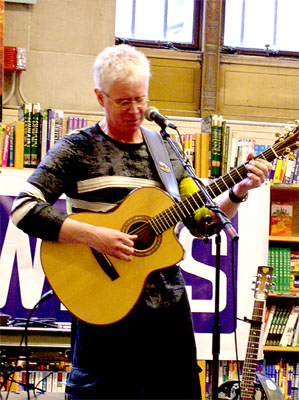 Tom Morton: Now when I was 19 years old I spent hours, days, months trying to learn to play a song called All the Diamonds by one Bruce Cockburn and some 27 years later I still can't play it but he can, at least I hope he can and it is a great delight to welcome a real hero to the program now, Bruce Cockburn. Hi there I presume you still can play that song can you?

Bruce Cockburn: Theoretically; I haven't played it in a few months but I'm pretty sure I can remember how!

TM: Very, very impressive. I am just wondering, I have always thought of you as a very visual songwriter dealing with hugely potent visual images but if there was a sense of something visual about this album it would be the darkness of it. I think would you agree with that.

BC: People have found it is kind of a dark album, there is that, I mean a lot of the visual imagery I agree with you I do use a lot of that. It's kind of on purpose. I try to, in a way, write cinematically where I set up frequently songs, especially the spoken word songs, are built around little scenes that follow each other and they are kind of cut together the way you might edit together scenes of a film.

Certainly in the title song those scenes are pretty dark. They are all drawn from life so I am not making it darker than it really is, but there's a lot of hope around things and I try to get that into the album too, the light I mean, what that song says, the title song [You've Never Seen Everything]: 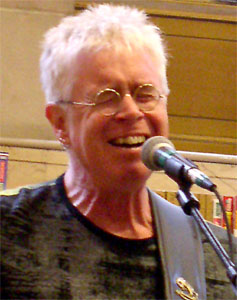 And the point is the light is falling all around even if you are completely caught up in the darkness and can't remember that at any given moment that it is there all the time. So hopefully, with enough listenings, people will get that.

TM: And of course there is the song Don't Forget About Delight which is kind of a response to the whole 9/11 thing and saying that there is room for delight in the world despite all the darkness.

BC: I wasn't thinking of 9/11 with that song but yes, definitely, the point of that song is that I was actually thinking of some friends of mine, various friends who were singer songwriters or other kinds of artists who were kind of trying to address reality as we understand it. And sometimes that gets pretty dark and depressing but it's really important to remember that you can party sometimes too, sing and dance. It's a lesson I learned way early on in the early 80s when I first started to get involved with Third World stuff and I remember going to Central America and there I am in the middle of a war zone and people were having a party. And it's not because they were forgetting about their surroundings, it's because they knew what life was all about because they were forced to deal with the essentials and you are either dealing with immediate tragedy or the absence of immediate tragedy which is cause for joy.

TM: I wanted to ask you about the visit to Nicaragua and El Salvador. It seemed to be a huge turning point for you in your writing and certainly that album, Stealing Fire and there is a sort of trilogy of albums surrounding that had a profound influence on me and many other people in UK. You must find that as you travel around the world that it has had a huge influence on folk. 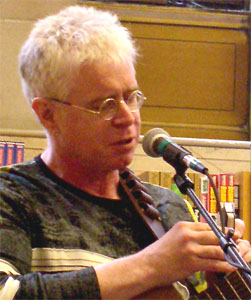 BC: That particular album, Stealing Fire did have the effect of certainly making the issue known to some people in North America. I am more familiar with the reaction to it in the US for instance, than I am in Europe, although lots of people appreciated that album on this side of the ocean. There were a lot of Americans that I have talked to, well relatively speaking, a lot. Right, we are not talking a huge demographic here but there were people who would come up to me after shows and say that they had been motivated by hearing these songs to kind of look into it themselves; and then ended up going down and joining coffee picking brigades or getting involved in other direct way to try and help things down there. So it did have some effect yeah, which was very satisfying to learn of.

TM: Good, now we are going to play Open from the new album. Tell me about that song.

BC: Open is pretty much a straight ahead love song, there's a "you" in the song and the "you" is the woman who was my then girlfriend (laughs). Guess it didn't work. Always awkward, that moment, when the album comes out. Well yeah, more for her than for me probably, but basically I am just saying, "Here I am and you are not here and wouldn't it be nice if you were" and that sentiment is the occasion for a little bit of self-reflection and a little bit of trying to kind of be "in the moment" and to appreciate being in the moment.

TM: I wanted to ask you about two lighter things Bruce, one of them being absinthe. [Absinthe] is a drink which I have never tried but has become a perennial topic in this program; people writing in with various recipes and stories I believe you once wrote a song under the influence of absinthe.

BC: In fact I did, I have friends in Toronto who make it.

TM: Ah... would that I had friends who make it!

BC: Yes, because it is quite different from the stuff that you buy in the bottles these days, it probably once wasn't. I think the recipe they use is an old French recipe but it got banned for a while or at least it was frowned upon in much the same way that marijuana was considered in the 40s and 50s to be this "evil devil drug" and absinthe got blamed for all sorts of excessive behaviour that it may not have been entirely responsible for. It is not exactly a healthy thing I mean ...

TM: Well I understand it was originally a kind of health drink [it] contains lots of vitamen C. 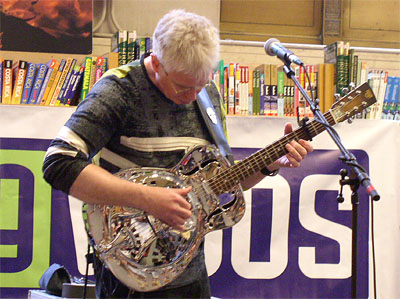 BC: I could see it being a stomach bitters type drink in addition to the alcohol content which is very high. There is wormwood, and wormwood has mildly psychotrophic effects, but the problem is that if you are not a regular drinker of it, which I am not, by the time you have drunk enough absinthe to get the effect of the wormwood you are, completely pie eyed from the alcohol, so you have to kind of set it up, in this case I did it deliberately, because I wanted to see what the big deal was, to see what everybody was talking about kind of. And of course we know that Rimbaud and Van Gogh and various other artists of that period were absinthe drinkers so I thought, well you know..

TM: This gave rise to the song Night Train.

BC: Yeah, well that was the deal. I drank a whole lot of absinthe and I sat down and wrote Night Train, so it worked. But I haven't tried it again since because the hangover was terrible.

TM: You know some people would say you know, they would pick and choose bits from your albums and say,"That [Bruce Cockburn] he's terribly serious" and yet there are some amazing party type songs in the BC canon. I think of something like Mama Just Wants to Barrelhouse All Night Long, and there's a whole range of stuff there. Would you agree with that?

BC: I hope there's a range of stuff! The intent is to grab as much of life as I can get hold of and put it in the songs and everything in life is fair game whether it is sexual or social or political or spiritual. All these things are part of the human experience as experienced by me and as distilled by me into what's in the songs. So hopefully there's a range of things; there's humour in some of the songs - you mentioned, Don't Forget About Delight, there's little bits of humour in that song. There's various points on the album where that comes through; often in my case it's a kind of dark humour 'cause I relate to humour in that way a lot, but it's just life.

BC: Well, I think when I began to talk about my own spiritual experiences in explicit terms in the songs it attracted a certain audience and the Christian youth, in particular, in North America were starved of a hipper kind of music from what they were normally fed. And some of them got interested in what I had to say but then when I started using cuss words in songs and started getting political, they got nervous about it. Some of them, some of them not, some of them stayed with it and some them are still listening over the years. I have had a few different demographic groups that have been interested in one thing or another in the songs over the years. The audience has slowly increased in size and I am really proud of my audience for the way they do tolerate the different things I throw at them and seem to be wiling to come back for more.

TM: Now I have to ask you finally: Bicycles, are they still important?

BC: Oh, very much! I ride my bike all the time. I take it on tour with me, probably not to Europe because we don't have quite the same kind of luxurious means of getting around Europe on tour as we do in North America.

TM: Don't tell me they've stuck you in a transit van!

BC: We've been in some pretty weird little vans in Europe. At home we normally tour with a bus that can accommodate a fold up mountain bike in the bay along with the luggage and gear and I take it with me and pretty much ride it every day.