NEWS ARCHIVE:
COMING IN 2002:
...A GREATEST HITS ALBUM WITH 2 TRACKS RECORDED IN 2001, FIRST U.S. RE-RELEASES FROM A SERIES OF 18 REMASTERED COCKBURN ALBUMS INCLUDING BONUS TRACKS, AND A NEW AUTUMN 2002 STUDIO ALBUM.
News Index

With the signing of this deal True North's Canadian artists will now have their music available in the U.S. on the True North label through Rounder Records. In Canada, True North continues to be distributed by Universal Music. 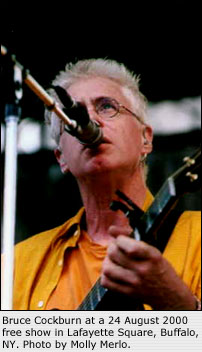 This new contract will commence with Rounder's release of the critically lauded jazz CD Creation Dream by Michael Occhipinti in October 2001.

During 2002, the first of 18 deluxe remastered and repackaged reissues will be released. These collections will be released over an extended period, featuring bonus tracks and will include such classic Cockburn albums as Stealing Fire, Dancing in the Dragons Jaws, In the Falling Dark and Humans.

More True North/Rounder releases will follow in 2002, including a full-length studio album by Bruce Cockburn in the fall.