NEWS ARCHIVE:
Q: WHAT IS BRUCE UP TO THESE DAYS?
A: A FEW ANTI-LANDMINE CONCERTS, BENEFIT CDS, AND GUEST APPEARANCES
News Index 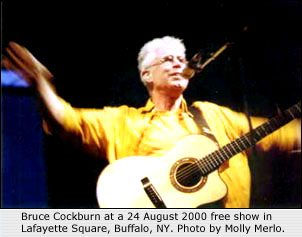 22 May 2001 -- We've been getting a few queries at the Project asking what Bruce Cockburn is currently doing, and when he'll be touring again.

Friends of the Project wondering why there isn't currently a tour would be well advised to check out the number of venues that Cockburn played at, in both 1999 and 2000! Let the man have a rest!

However, it's not all bad as there are a few scattered dates on the horizon. On 19 and 20 September 2001, Cockburn will be performing in another two Concerts for a Landmine Free World. The second date, in Washington DC, will be filmed for a PBS television special. 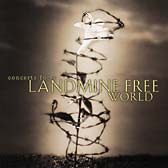 If you still haven't heard the CD (right) from the anti-landmines concert series, an April review and links to purchase information are available in the news archive.

Ani DiFranco (left) and friends are putting together another benefit CD, this one in support of the FTAA Summit protesters (read a testimony from a street medic in the Issues Updates section). Bruce and his management have donated the studio version of "Call It Democracy" to the CD.

A Cockburn track will also be appearing on a coming tribute album of Mississippi John Hurt songs, to be released by Vangard Records next month. More news will follow.

In late May/early June, Bruce will be recording with Canadian jazz pianist Andy Milne, for Milne's next album. See the December 2000 report in the news archive for more information.

Other than this, True North reports that, bar a few possible guest appearances on other artists' projects, Bruce's intention "is to be doing as little as possible for the next while, which will be at least until next year."

Thanks to Nancy Bouwma and Audrey Pearson for additional information.