FOR MUSICIANS
-- Cockburn's gear, through the years --
For Musicians Index

The image on the right is a screen shot from the "Bruce Cockburn - Pictures from Concerts" section of Marie Westhaver's website. Marie has collected images from as far back as the 1980s, and has pictures of many of Cockburn's guitars through the years.

1960's
In the early 1960's, Bruce's parents bought him a Kay Archtop guitar. This guitar was an acoustic until Bruce installed a DeArmond pickup in the guitar [Source: as above].

Late 1960s
Bruce was using several guitars. Of these we know that he was using a Fender Telecaster and a Martin 00-18 [Source: As above].

1970s
Bruce aquires his first Wren handmade acoustic guitar. This guitar had a Florentine cutaway,a Cedar top, and Indian Rosewood back and sides. [Source: E-mail from David Wren, from the 12th Fret store in Toronto, to Jon Carroll.]

1973
Bruce aquires a Gibson ES-355 and a Gibson ES-345, and shows us what they are for on Mama Just Wants to Barrelhouse All Night Long and Lightstorm from the album Night Vision (1973). The amplifier used with the guitars was a 15-watt Standel amplifier [Source: Guitar Player Magazine interview conducted by Jim Schwartz, 1980]

1974
Bruce aquires the first cutaway L'arrivée steel string guitar, custom made for him. It had a Florentine cutaway, Masscar Ebony back and sides, and a spruce top. Apparently the guitar did not have pickups judging from the inside cover photo of Circles In The Stream (1997), where the guitar appears to have a removeable soundhole pickup (see B&W photo above right, click for enlargement) [Source: as above, and David Wren].

1979
Bruce aquires his second David Wren acoustic (pictured right, Bruce's third Wren which he acquired in 1984 - photo by Greg Moran, click for more). It is a Venetian cutaway (and was later burned in a studio fire) with Indian Rosewood back and sides and a Cedar top. [Source: E-mail from David Wren, from the 12th Fret store in Toronto, to Jon Carroll.]

1980
Bruce acquires an Antigua Fender Stratocaster, pictured (right, colour) on the back of the album Mummy Dust (1981). 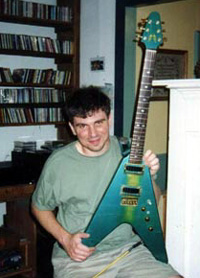 1981
In 1981, Bruce acquired a Yamaha L-55 with a Florentine cutaway, inlaid headstock, and spruce top (see photo by Murray Harrison on Marie Westhaver's site). [ more photos from Murray in the 1980's ] In early 1981, Bruce acquires a blue De Jonge Flying V guitar (pictured right, based on the Gibson design), which appears on the cover of the Rumours Of Glory video (1985) and is used during the song Radio Shoes.

This guitar was sold on eBay.com in May 2000 for just under US$1,000 [Source: feature on this website, which includes interviews by Nigel Parry with the current owner, John Raffaele (pictured right) and the guitar's luthier, Imre De Jonge].

In mid-1981, Bruce also acquired an orange-flake De Jonge Flying V. This guitar appears in the Rumours Of Glory video (1985) [Source: as above].

1984
Bruce was using a Lake Placid Blue Yamaha Pacifica, with a rosewood fingerboard. In 1984, Bruce aquired his third and final blue David Wren acoustic. At the Montreal Spectrum in Quebec, Canada, on 30 June 1984 Cockburn is pictured (see Greg Moran's photos on Marie Westhaver's website) with the Pacifica and the blue Wren.

1987
In 1987, Bruce acquires a pair of Linda Manzer Stratocaster copies. These were blue (almost sparkle), painted with a Canadian automotive paint. They had black pickguards, knobs and pickup covers, with DiMarzio pickups (a DiMarzio HS35 in the Bridge position and DiMarzio HS15s in the neck and middle positions) and Alembic Pre-amps installed by Mark Herbert of Boston.

Bruce originally sold the pair at Ring Music. One of the pair was a 12-string and sold in June 2000 for US $1,020 at The 12th Fret in Toronto.When it sold,the DiMarzios had been replaced by Evans noiseless pickups.

1988
Bruce acquires a Linda Manzer acoustic guitar (see right), which remained with him for 11 years. It had Mayan calender symbols for fret markings, and its cedar top was painted blue by adding blue dye to the laquer.

Brian Jantzi from Toronto has provided information on one of Bruce's amps which was presumably used up to about this time.

"I bought my first good guitar amp in 1988 from Ring Music. I tried everything used that was there at the time and settled on this 1959 Fender Tweed Tremolux. It had the name 'Bill' written on it in ink and looked a bit worse for wear. Usual for old tweed. Right after I paid for it ($788 in 1988), the Ring person told me: 'You just bought Bruce Cockburn's amp.' I've had John Fletcher tune it up and refurb over the years and this amp continues to be the holy grail of tone. Bruce had a 16 Ohm Ovation ceramic in it when sold. I replaced it with a Weber alnico 8 ohm and tone went from a 10/10 to a 12. Thank you Bruce!"

1990
Bruce aquires a Chrome Dobro (pictured right at The Ram's Head in Annapolis, Maryland June 23, 1998. Photo by Marie Westhaver, click for more.). This guitar has Palm tree grapics on it's metal body. In an Acoustic Guitar Magazine article in 1999, Cockburn commented that:

"The way I use that Dobro live," he says, "it's got a Tele pickup in it and a microphone built into it as well, and the audience gets to hear the microphone and I get to hear the Tele pickup. That's the system, so that I can get the volume I need without it screaming at me. But sometimes we'll mix them up, you know, because the pickup sounds pretty nice, particularly through old vintage amps that are not designed to such high tolerances as modern ones. On the song 'Use Me While You Can,' we were recording both of them. You'll hear it start with more of the Dobro sound, and the pickup comes in as it goes along you start to become aware of the tremolo and the extra sustain that the pickup gives it. And we fool around with that kind of thing live sometimes, too."

1991
On the album Nothing But A Burning Light (1991) Cockburn uses a Fender Jazzmaster and a custom National "Resolektric" guitar with a red pearloid pickguard and aqua finish. The Resolektric seems to be styled afer a Fender Mustang.

1997-2000
Bruce shops at The 12th Fret and Ring Music stores in Toronto. He has also shopped at Westwood Music, in Santa Monica, CA, where he bought a Collings Acoustic used on the current album, Breakfast In New Orleans, Dinner In Timbuktu (1999), used with a Neumann U89 microphone.

The mic was straight to the board, no effects, the pickup signal went through the effects. I can't tell you details on the effects, but they were discrete boxes; digital delay, tremolo, chorus, probably a few others. He also played a 12-string Guild with an I-Beam (LR Baggs makes it I believe), and no mic on this guitar that I remember.
[Source: David Smith]

2017
Teaj saw Bruce Cockburn and band in Ann Arbor, Michigan on 17 November 2017, for the Bone On Bone tour. He has written an indepth article on all the gear Bruce and band are using during this tour. Serious G.A.S. - Bruce Cockburn – Glimpses of a Master’s Gear. Wonderfully written, even for non-gear heads, do go check it out.

Pedal Board photo by Kirsti Reeve

For Musicians Index
This page is part of The Cockburn Project, a unique website that exists to document the work of Canadian singer-songwriter and musician Bruce Cockburn. The Project archives self-commentary by Cockburn on his songs and music, and supplements this core part of the website with news, tour dates, and other current information.